FDA: Come to Us with Questions, Don’t Wait for Guidances

Instead of waiting for formal U.S. Food and Drug Administration (FDA) guidances, try reaching out directly to FDA officials with your questions, said several Center for Drug Evaluation and Research (CDER) officials at the ACRP 2017 Meeting & Expo in Seattle today.

Guidances are inherently slow and their timing unpredictable. However, clinical trial professionals can more effectively control their own regulatory destiny by being proactive with the agency, FDA panelists said during the meeting’s kickoff Signature Series Session, “A Conversation with the FDA,” this morning.

“Asking the question gets you half way there” to compliance, said David Burrow, director of CDER’s Office of Scientific Investigations (OSI), Office of Compliance Center. Burrow allowed that there can be “friction, and you will not always like the answer you get”—a point echoed by panelist Jan Hewett, CDER’s regulatory counsel for policy in the OSI.

Calling ACRP an “absolutely fantastic partner” in bringing regulators and industry together, Burrow noted that FDA inspections are “fluid,” and the agency was often playing catch up in terms of industry innovations. That’s particularly true when it comes to technology. 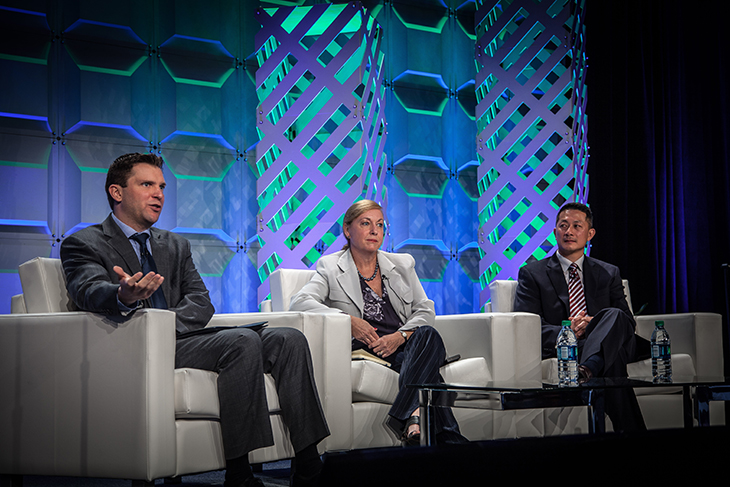 The more clearly you can demonstrate the advantage of a technology, the smoother the approval process tends to be, advised Sean Kassim, director of CDER’s OSI Office of Translational Services.

“The tide is rising,” said Burrow. “We’re moving in a positive direction.”

“It’s difficult for the FDA,” said panelist Douglas Pham, acting director of the Division of Enforcement and Postmarketing Safety with CDER’s OSI. The agency needs time—and data—to be able to confirm the efficacy and value of a given technology, he stressed. It can’t always be done quickly. FDA is still working on the best way to inform industry of its expectations, Pham told the crowd.

Audience questions turned to the issue of investigator-initiated trials, which tend to have the highest level of noncompliance issues, Burrow noted. He encouraged institutional review boards to more actively send questions to FDA review divisions to proactively address compliance issues.

“We’re all on the same team,” Burrow said. “We have a shared interest in getting products that are useful approved.”