Anyone who’s seen Russell Crowe portray the fictitious Captain Jack Aubrey in “Master and Commander: The Far Side of the World,” or read about the exploits of real-life military genius Admiral Horatio Nelson, could be forgiven for assuming the biggest heroes of the British empire were the swashbucklers who helped rule the Atlantic Ocean 200 years ago.

Yet, while he’s not likely to be portrayed anytime soon as an action hero in a film, mild-mannered Scottish physician James Lind arguably saved more lives than any military or political leader as the nation battled for turf and plunder. In March 1747, he was appointed surgeon of the HMS Salisbury, a 50-gun ship in charge of patrolling the English Channel. Lind seized the opportunity to test a theory about why scurvy was riddling the crews of Britain’s ships on the high seas.

Scurvy took a tremendous toll on the British navy. Some estimate it killed more soldiers than French and Spanish adversaries combined.

In what’s widely credited as the first documented clinical trial, on May 20 Lind divided 12 sick sailors suffering from scurvy into six pairs, and provided each of them with a different supplement in their diet: cider, vitriolic elixir (diluted sulfuric acid), vinegar, sea water, two oranges and a lemon, or a laxative mixture.

The results are something easy for modern clinical trial practitioners to envy today. Almost immediately, only the two sailors who took the fruit improved, even though the oranges and lemons ran out after six days.

Lind’s legacy lives on today through the work of tens of thousands of clinical trial professionals in the United States and worldwide. To celebrate, May 20 has been dubbed Clinical Trials Day, with events online and in cities including Miami and San Antonio.

Last November, the Association of Clinical Research Professionals (ACRP) and Greater Gift announced a partnership to raise awareness of clinical trials among the greater public through the PopUp Star competition and Clinical Trials Day.

“Without an adequate pipeline of qualified, competent professionals, our community will fail both to sustain the workforce and to improve the efficiency and quality of medical discovery,” said ACRP Executive Director Jim Kremidas. “Clinical Trials Day is a great opportunity to recognize the professionals behind medical innovation, to help grow the workforce of tomorrow, and to increase awareness of clinical research as a care option.”

Celebrate Clinical Trials Day on May 20 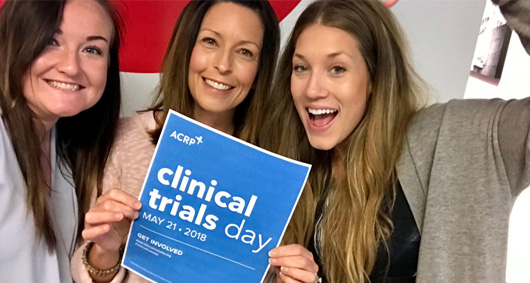 Clinical Trials Day is a well-deserved ‘time out’ to recognize the people who conduct clinical trials and to say “thanks” for what they do every day to improve public health.

Get Involved and Show Your Pride >>

PopUp Star is an industry-sponsored contest to bring clinical trial awareness to the public by challenging stakeholders to lead teams that will create the ultimate clinical trial community awareness event. Diverse teams from across the world compete to raise awareness of the importance of clinical research as a care option within communities.

PopUp Star has expanded to 12 entries this year from four in 2018, says Kevonna Hayes, senior program coordinator at GreaterGift.  “We’re really excited about that,” she said.

In Miami, Segal Trials and “Team Fight Club” will host a Clinical Trial Awareness Health Fair to help promote clinical trial participation. Attendees will have an opportunity to learn about many resources that are available to them within their community. They will also hear firsthand from current and past clinical trial volunteers about their experiences participating in trials.

In San Antonio, the “Alamo City Stars” team will produce a citywide clinical research expo highlighting all functions involved in the clinical trials process and showcasing local industry, academia, healthcare providers, advocacy groups, and patients. Information booths for each company/group will be set up with interactive displays highlighting what they do and promoting studies that are actively open for enrollment in the community.

“I don’t think people realize how many companies there are in San Antonio with research activities going on,” said organizer Jane Hart, PMP, vice president for global clinical affairs at Acelity. “We’ve got 16 companies represented, including a number of local hospitals.” In addition, there will be representatives from contract research organizations, institutional review boards, and trial sponsor companies. “We feel we’ve got a good representation of different company types,” Hart said.