Support the ACRP Ride for Diversity!

Help us increase diversity in the clinical research workforce by supporting this "ride for a reason."

Back in the days of long ago when gasoline was 35 cents per gallon, service station attendants washed your car’s windows, checked its oil, and offered free roadmaps as part of the preamble to filling the tank. Today, those prices and services are distant specks in the rearview mirror.

Clinical researchers can empathize when it comes to a lack of roadmap—in this case, for their careers. In an industry not noted for its clear paths to promotions or new roles, it’s often up to practitioners to craft their own passage to career advancement.

For Theresa Kump, BA, CCRP, administrator of the Division of Pediatric Pulmonary and Sleep Medicine and clinical research manager at the Medical College of Wisconsin, clinical research coordinators (CRCs) and others in the field have an opportunity to seize the initiative. She advocates getting involved in “scholarly activities” such as publishing in ACRP’s Clinical Researcher journal, attaining ACRP certification, and getting involved in committees at the workplace.

“It can sound intimidating” to go for publication in a trade journal, Kump admits, but she adds that it’s also an opportunity to network with others and write an abstract as part of a team. Not only will a CRC learn from working with others on such projects, but they are excellent networking opportunities, Kump says.

Seek out roles with onsite committees dealing with issues like budgeting, training, and regulations, she adds. “CRCs don’t always feel like they are invited to these committees, but their voices can be an important addition” to the conversation, she notes.

To Infinity and Beyond Coordinator Duties: Steps to Advancing Your Career

Looking to move beyond the coordinator role? Join Kump and other industry vets at ACRP 2022 to learn how to take the next step and advance your career.

Participating in committees will raise a CRC’s profile, too, Kump advises. “You want people at your organization to see you and think ‘research,’” she adds. “Get yourself out there.” Further, after participating in a few committees, consider hosting your own in-house roundtable, Kump says. 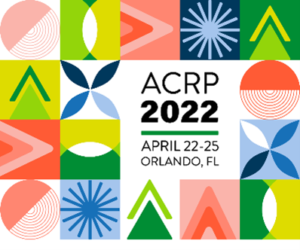 She’s also a big advocate of certification. “I’ve been certified so long I joke I took the first test in pencil,” she says. Kidding aside, gaining and maintaining certification demonstrates “a commitment to advancing your career, and shows you have discipline,” among other positives, Kump notes. Certification can also “open doors to other positions” at a CRC’s shop or elsewhere in the industry, she adds.

Site Technology: The Future is Free