Parkinson’s disease (PD) is a neurodegenerative disorder affecting an estimated one million Americans and six million people worldwide. No cure or treatment to slow the progression has yet been found, but research is leading to deeper understanding of PD and its impact. However, this knowledge is hampered by underrepresentation of people of color and other underserved populations in Parkinson’s research studies. As a result, our understanding of how Parkinson’s affects people across racial, ethnic, socioeconomic, gender, sexuality and geographic spectrums is incomplete.

This representation gap has long been noted in medical research. For example, non-Hispanic whites of European ancestry represent 60.7% of the U.S. population, but comprise over 90% of the population in clinical trials. The total percentage of minority inclusion from all clinical trials in the United States during the last 25 years was just 3.95%.[1]

Similarly, in a position paper published in the Journal of Parkinson’s Disease, Michael J. Fox Foundation (MJFF) staff discuss the critical need to engage diverse people in clinical studies of the disease. The paper cited a 2009 study finding that “in the minority of PD clinical trials reporting race and ethnicity data, only 8% of participants were non-white.” Such underrepresentation means a lack of understanding of critical factors that may impact different populations and ethnic groups, such as genetics, risk factors, disease presentation, and disparities in PD diagnosis and treatment.[2]

MJFF is committed to inclusive Parkinson’s research to ensure that underrepresented populations are contributing their unique characteristics and information. Along with funding outside research, MJFF leads its own studies to accelerate knowledge of PD, such as its landmark study, the Parkinson’s Progression Markers Initiative (PPMI). Launched in 2010, PPMI is entering a new chapter with a seismic expansion. The study is on a mission to grow its already invaluable dataset of 1,400 to 4,000 volunteers around the world — with and without Parkinson’s — to accelerate earlier diagnosis and groundbreaking treatments to benefit people with PD today and make disease prevention a reality for future generations.

To support MJFF’s outreach to underserved populations through their trusted health care professionals, Altura is partnering with the Foundation on these efforts. For the past seven years, Altura has provided participant study support and engagement for various MJFF studies. 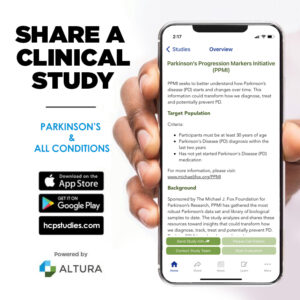 According to Altura CEO Pete Fronte, “The challenge with enrolling clinical trials and health studies always centers around one fact: Studies are not well integrated into the healthcare delivery system and its related support structures. People like to hear about studies from the people they trust, especially those from communities of color and underserved populations.”

In the past, the collaboration included an HCP Studies project that successfully engaged 1,000-plus Parkinson’s healthcare professionals and other stakeholders to promote community-based awareness and enrollment in another MJFF online study, Fox Insight. HCP Studies produced over 60,000 study exposures, resulting in an incremental enrollment of 3,900 volunteers many of which were in rural and underserved areas.

The project’s success built on the fact that most people with health issues, and particularly with Parkinson’s, do not rely only on their doctors for study information; it could be anyone who provides support, treatment or care for a particular condition. Thus, by also activating support groups, physical therapists, pharmacists and leaders of various local and national exercise programs, HCP Studies substantially increased patient awareness of and enrollment in Fox Insight.

“Our goal is to mobilize the community and connect people living with Parkinson’s, their loved ones and those who may be at risk to the important role they each play in accelerating better treatments and a cure,” said MJFF Deputy CEO Sohini Chowdhury. “Today, it’s imperative that we dedicate even greater resources to education and engagement for the widest range of people. Imagine where we would be with a more holistic view of the disease. Using state-of-the-art technology and patient-centered services through Altura, The Michael J. Fox Foundation’s PPMI study aims to reduce the burden of recruitment and help critical breakthroughs move forward for every person touched by Parkinson’s.”

Altura invites HCPs, people with Parkinson’s, caregivers, research professionals — and anyone interested in finding solutions for brain disease or other medical conditions — to download HCP Studies at no cost and share study information with those who might have an interest or need. Study sites may also add any of their clinical trials at no cost.  Find the app on the App Store and Google Play, or visit https://alturastudies.com/hcp-studies-2/.

On Behalf of Altura

A Culture of Quality: Are We Achieving the Desired Impact?

Develop Your Self-Leadership for Better Workplace Performance and Self-Esteem