Once thought of as being pursued only in the realm of science fiction or under highly experimental conditions, the science of gene therapy is now considered to be well understood, and the field is thriving.

As of the writing of this article, to date, more than 2,900 gene therapy studies have been initiated worldwide.{1} Searching ClinicalTrials.gov for the keywords “gene therapy” results in more than 3,800 studies, with more than 1,000 of them currently recruiting or enrolling research subjects.{2}

The gene therapy field overcame several hurdles to reach its current state. High-profile serious adverse events have been reported over the years, including the tragic death of Jesse Gelsinger in 1999 and leukemia in children with life-threatening immune deficiencies (i.e., severe combined immune deficiency [SCID] and chronic granulomatous disease [CGD]).{3–6} These incidents occurred at the turn of the century and led to a decade of intensive study, redesign and safety testing of gene therapy technology.{7–10}

During this period, the U.S. Food and Drug Administration (FDA) issued various guidance documents regarding the manufacture of gene therapy products, design of clinical trials, and long-term follow up for certain types of investigational products for gene therapy.{11} As the field focused on reassessing safety, the number of investigational new drug applications (INDs) received by FDA for gene therapy products has grown exponentially from 1995 to 2010 (see Figure 1).{12} 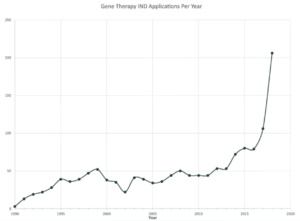 The surge in research has also led to approvals (see Table 1). FDA issued its first approval of a product containing engineered genetic material (i.e., recombinant DNA) in 2015 and has since issued six more approvals, with the most recent dated May 24, 2019. With 291 gene therapy studies currently in Phase III, several more gene therapy products will likely be considered for approval in the coming years.

With the increasing number of late-phase gene therapy studies and continued growth of the field, it’s important for clinical research professionals to familiarize themselves with the prospects, risks, and regulatory requirements for conducting gene therapy research.

Approximately two-thirds of gene therapy studies are in the field of oncology.{1} With the aging Baby Boomer demographic, demand for advancements in oncology and availability of research subjects for clinical trials are likely to increase.

The second most common area of gene therapy research (11.5% of reported studies) applies to monogenic diseases.{1} While diseases caused by single gene mutations are rare, they represent low-hanging fruit from a technical perspective, as current technology offers a wealth of techniques for correcting single gene mutations. Examples of such diseases are listed in Table 2.

The third most common type of research (6.3% of reported studies) occurs in the field of infectious diseases.{1} Genetic engineering allows new avenues for development and manufacture of vaccines. FDA has already approved vaccines containing engineered genetic material to protect against cholera and dengue virus infections. Genetically engineered Ebola vaccines are undergoing evaluation in the current outbreak in the Democratic Republic of the Congo, with promising early results.{13–14}

Most clinical researchers are familiar with the regulatory requirements pertaining to the FDA phases of research, as well as with institutional review board (IRB) review. Gene therapy studies may require additional review to assess the risks associated with the engineered genetic material, especially as the technology frequently utilizes genetically engineered viruses to deliver genetic information into target cells. Viral infection involves the transfer of the virus’ genetic material to host cells, making viruses ideal tools for gene transfer—once the viral genes responsible for viral replication and disease are removed. While genetically modified viruses have a greater safety profile than the naturally occurring unmodified variety, they remain infectious and capable of posing risks.

National Institutes of Health (NIH) Guidelines for Research Involving Recombinant or Synthetic Nucleic Acid Molecules (NIH Guidelines) provide the standard for oversight of research involving genetic engineering and gene therapy.{15} NIH Guidelines are promulgated by the NIH Office of Science Policy (OSP) and call for local oversight at the research site by institutional biosafety committees (IBCs) that report to the NIH OSP. IBCs are charged with protecting study personnel, the community, and the environment from exposure to engineered genetic material. An IBC may also advise the IRB to aid in assessing risks to the study subjects.

The requirement for IBC review applies to gene therapy research at sites that are receiving funding from the NIH or that have ever participated in NIH-funded research. Sponsors or sites that have received any NIH funding are obligated to comply with IBC review regardless of whether the funding is associated with the gene therapy study. Studies and sites completely independent of NIH funding may still require IBC review if the research and development that led to the investigational product was funded by NIH. Even if there are truly zero NIH funds involved, IBC review is considered a best practice: NIH Guidelines state that “individuals, corporations, and institutions not otherwise covered by the NIH Guidelines are encouraged to adhere to the standards and procedures set forth” in the Guidelines (Section IV-D-1).

IBCs are composed of at least five members, including at least two unaffiliated community members, who collectively possess the expertise to assess the risks associated with proposed research projects. IBC review involves assessing the risks associated with the genetically modified investigational product, as well as the adequacy of a facility’s safety practices and training intended for use of the investigational product at the site.

The IBC ensures the site has adequate incident reporting and response plans in place to address potential occupational exposures, spills, or environmental releases of the investigational product. The IBC may review informed consents and other research subject training materials to mitigate possible risks to casual or close contacts in the community. Reviewing the site’s plans for disposal of the investigational product and associated biomedical waste allows the IBC to ensure environmental protection.

Because they are charged with protecting the local community and environment, IBCs are locally based at the research site and can only oversee research at that location. For the sake of efficiency, however, local IBC meetings can be centrally coordinated and synchronized, with each IBC remaining responsible for local review.

Pharmaceutical companies and contract research organizations conducting multisite clinical trials may benefit from efficiencies provided by centrally administered IBC reviews, utilizing a model similar to central IRB reviews. NIH refers to such review bodies as externally administered IBCs and allows sites to utilize them as long as the IBCs are registered with the NIH OSP as representing the individual sites at the time the review is performed. NIH allows sites to register multiple IBCs, so an academic institution with an existing IBC focused on preclinical research in the laboratory setting may choose to utilize an externally administered IBC for review of clinical trials and industry-sponsored research.

At a single meeting, the centrally administered IBCs can conduct reviews for multiple sites participating in a single study, as long as the required local representatives are present at the meeting and separate minutes are recorded for each site. This approach streamlines the process for submission and review, providing a single point of contact for submissions as well as harmonized forms, policies, and procedures across sites.

IBCs run by institutions may have set monthly or quarterly meeting schedules, and can insert IBC review as a “blocking review” (i.e., the institution’s IRB will not accept a protocol for review until the IBC has issued its approval). Centralized IBCs, in contrast, often convene “on demand,” which eliminates the practices of submission deadlines and standing meeting schedules, and results in turnaround times measured in days instead of weeks or months. For example, in 2019 the central IBC service provided by Advarra, a commercial research compliance organization, has averaged turnaround times of 7.1 business days (N = 40 studies) from submission to review for National Cancer Institute–designated cancer centers. These centers previously experienced turnaround times of up to three to four months when working with their locally administered IBCs.

In the 1980s, the ability to transfer engineered genetic material into humans was completely new to the clinical setting. Review of gene therapy studies was included in the responsibilities of the NIH Recombinant DNA Advisory Committee (RAC), which created the first set of requirements for review of gene therapy research in 1985.

The latest version of the NIH Guidelines (issued on April 25, 2019) removes the requirements for IRB and IBC RAC determination, as well as protocol registration and reporting requirements to the NIH OSP. These requirements were deemed to be duplicative with the level of oversight currently provided by FDA as well as the IRB and IBC. As the RAC no longer reviews individual clinical trials, the role of the RAC was revised to focus on the “scientific, safety, and ethical issues associated with new and emerging biotechnologies.”{17}

To further emphasize this more general role, the RAC has been renamed the Novel and Exceptional Technology and Research Advisory Committee (NExTRAC). The committee’s amended charter charges it with advising the NIH Director “on matters related to the conduct and oversight of research involving emerging technologies in biomedical science….”{18}

As the committee no longer reviews large volumes of gene therapy studies, the NExTRAC can now focus on emerging biotechnology requiring the focus of a national panel of experts. Many issues are likely on the horizon for the NExTRAC, such as emerging developments in gene editing technology like CRISPR and zinc finger nucleases, especially as they pertain to clinical research. Other likely matters of future discussion include applying gene editing technology to human reproduction and environmental issues, such as gene drives and environmental release of modified mosquitos incapable of transmitting diseases.

FDA and the Future Oversight of Gene Therapy

As the lead regulatory agency for review of gene therapy studies, FDA has taken a number of steps in recent years to assist in bringing gene therapy from the realm of scientific theory and research to the world of approved and licensed therapeutics for clinical use:

In their joint statement, Gottlieb and Marks write that the growth in gene therapy “…reflects a turning point in the development of these technologies and their application to human health…. It’s similar to the period marking an acceleration in the development of antibody drugs in the late 1990s, and the mainstreaming of monoclonal antibodies as the backbone of modern treatment regimens.”{21}

Once considered highly experimental and limited to early-phase studies at highly specialized research sites, the field of gene therapy has progressed to mainstream clinical research. With the current research boom and progression into large multi-site clinical trials, clinical researchers are increasingly likely to be involved in gene therapy studies throughout their careers.

Clinical researchers should be aware of the maturation of this field and consider the opportunities it may provide to their careers and their patients. Understanding the history and fundamental technical principles of this science will allow clinical researchers to understand the capabilities and limitations of this exciting and innovative field. It is also important for clinical researchers to be familiar with the prospects, risks, and regulatory requirements to be able to safely conduct gene therapy research.

The author would like to acknowledge the assistance of Shaun Debold, Stephanie Pyle, Cameron Stahl, and Sarah Bowman in the preparation of this manuscript.