Clinical teams are under enormous pressure to reduce cycle times and accelerate trials to completion. It costs an estimated $2.6 billion to get a drug to market{1}—twice as much now compared to 15 years ago. Study delays can contribute $800,000 to $8 million per day, highlighting the need to drive more efficient clinical trials.

At the same time, studies have become increasingly complex and the number of endpoints and procedures are growing, making data management timelines longer. Average times to build and release databases and lock study data have both increased over the last 15 years.{2}

Operational excellence is a core principle at Vertex. Since 2017, the global biotechnology company has been outperforming industry averages for data entry and data lock cycle times; its EDC data are typically entered by sites within 48 hours and data locks are completed within 15 to 18 days. Only its database build times, averaging 12 to 14 weeks, were slower than desired.

The company set a goal to shorten build times to six to eight weeks, with completion to always come before the “first patient first visit” milestone. The data management team needed a modern, agile EDC that would support process changes to reduce build times, while maintaining the highest standards.

“You can’t compress a 12 to 14–week timeline to six weeks by just working faster,” said Vikas Gulati, executive director for clinical data management and metrics at Vertex. “Likewise, there is no benefit in shortening database build times if it impacts quality or extends lock times.”

Traditionally, Vertex would author and provide its EDC vendor with a detailed specification document, commonly called “a spec,” detailing study build requirements. To shift toward spec-less design, its current EDC vendor built a study template based on Vertex’s standards library for electronic case report forms (eCRFs). With the study template, the vendor now works directly from the study protocols. This eliminated the process of authoring and reviewing a spec, saving Vertex weeks with each study. Adding cross-functional design reviews to the build process preserves the thought, rigor, and oversight that goes into ensuring the EDC is capturing the correct data and running the appropriate checks.

Reusing forms from a library or a template study greatly increased the efficiency and lowered the effort of building studies, especially for an organization like Vertex that focuses heavily in one therapeutic area. In the first two studies with its current EDC solution, only one net new form needed to be created. The rest were pulled and modified from the standards library. 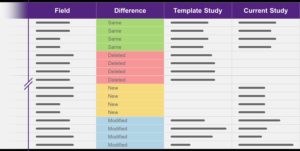 Documenting any and all differences between two studies provides valuable documentation for UAT, go-lives, and protocol amendments.

For the forms that still needed to have UAT performed, Vertex abandoned the traditional “ping-pong” approach to UAT—a process of sending a casebook back and forth between the vendor and study team that could take up to two weeks per round. Instead, Vertex adopted a live, real-time UAT model in which the stakeholders of the study gather in a single room with the vendor to make real-time updates directly to the casebook, saving time and aligning stakeholders on the changes.

“Live UAT updates are a game-changer,” said Gulati. “By providing feedback, fixing problems, and testing updates immediately, we can eliminate three to four weeks from our timeline.”

By modernizing its clinical data management processes, Vertex has reduced average build time to 7.5 weeks, meeting its goal and continuing a track record of operational excellence.

In addition to being a full-service contract research organization (CRO) for analgesic studies, Lotus Clinical Research operates a state-of-the-art research site. It aims to lead the pain market for CRO and site services by introducing and validating technologies that will improve analgesic study design and conduct.

The company adopted an EDC solution that was easier to use for site personnel, data managers, and clinical research associates (CRAs) and that improved efficiency across teams. With a capability in its EDC system that allows patient listings and forms formerly created for the use CRAs at a significant cost of time by data managers to now be automatically generated within the system itself, Lotus automates the tracking and sorting of patient data for entry, source data verification (SDV), and review.

“I used to send my monitors all the reports before they went on their monitoring visits,” said Andrea Krueger, a data manager for Lotus. “Now my CRAs told me not to send them anymore, because [in our EDC now], you click on a subject casebook and it shows what requires SDV and what queries need to be addressed. It’s all in the system already.”

This functionality provides benefits to data managers and CRAs, saving both monitoring time and effort. Instead of cross-referencing a spreadsheet, CRAs work directly within the EDC. The system filters out the visits and forms that haven’t been completed or that were already reviewed, listing only the data that need SDV and queries that need answers.

Data managers can also save time preparing for meetings with clients. The reports and dashboards that show progress and status of data entry are also fully automated in the cloud-based EDC system.

“Our clients really like receiving the status reports,” said Krueger. “They can see the status of SDV and data reviews, look at the query reports and status, and who opened and closed queries. The dashboards have saved me an enormous amount of time as well. Before, I would pull reports, calculate the metrics, and plug those into our template. Now, I’ve configured my dashboard to show that exact same data automatically. We simply pull up our dashboard during the sponsor calls and walk them through the status, and we can double click to drill down into any of the metrics if they have questions.”

“Our [system] gives site personnel a user-friendly interface that takes them directly to what’s needed so they no longer have to click through casebooks and find where they left off,” said Jennifer Nezzer, director of biometrics at Lotus Clinical Research.

As a small clinical-stage biopharmaceutical organization, Cara Therapeutics outsources its studies to CROs, often using different vendors for different studies. It’s a growing trend in response to the rising complexity and cost of running a trial. It is estimated that by 2020, nearly three-quarters of trials will be outsourced to CROs.{3}

Outsourcing trials created delays in accessing data because the company was dependent on CROs to handle periodic exports of the data. Working with multiple CROs also introduced variability into the CRFs and datasets, creating more work downstream for the programming team because each CRO used its own EDC and standards.

Cara wanted the benefit of using CROs that specialized in specific clinical areas, while also maintaining control over CRFs. By providing CROs with a cloud-based EDC, Cara was able to standardize and align data collection from multiple CROs.

“Our new clinical data management system gives us control over our casebooks and consistency in our data when working with different CROs,” said Evelyn Dorsey, associate director of data management for Cara Therapeutics. “We’ve used the system with more than five different CROs, and they have all been impressed with the speed of building studies and making mid-study changes.”

Rather than waiting until the end of the month for data transfers from a CRO, now Cara can analyze and investigate data continuously by simply signing into its EDC. Cara has constant, direct access to its trial data in real time. With higher visibility into study status, it also sees the operational reports showing the status of data collection and cleaning without having to ask the CRO for a separate report.

Flexible reporting within a cloud-based EDC is also valuable when working with multiple CROs. Sponsors see operational data in a consistent way across studies, while each CRO can see the study metrics and reports according to its own preferences.

“We have six or seven different CROs working with us, and they have three or four team members within the data management group working on each of our studies,” said Dorsey. “Flexible reporting is really valuable to us, as we are able to share our custom reports from other studies as a baseline. Each team member with access to the EDC can customize their view of that report however they like it, without the need request such reports from the programming team, which also means cost savings for Cara.”

There are dramatic changes under way in clinical data management, and yet the challenges associated with EDCs and managing site data have persisted for years. The recent advancement in EDC innovations are helping companies like Vertex, Lotus, and Cara solve persistent challenges with lengthy build times, inefficient SDV, and disconnects between sponsors and their CRO partners.

Advancement in clinical data management will continue to help CROs, sites, and sponsors toward modernizing trial processes and reducing the speed and cost at which we can bring treatments to patients.

Henry Levy (henry.levy@veeva.com) is general manager for Veeva Vault CDMS with Veeva  Systems, president of the industry standards groups Align Biopharma and Align Clinical CRO, and a board member of the Alliance for Clinical Research Excellence and Safety.