I Can See Clearly Now

Life is eternal; and love is immortal; and death is only a horizon; and a horizon is nothing save the limit of our sight. ― Rossiter Worthington Raymond (1840–1918)

As we are concentrating on the power of new perspectives on the clinical research workforce in this issue, I offer up the above words* from a gentleman whose career surely must have benefitted from the ability to look at the world from many different angles at once. Rossiter Worthington Raymond was an American mining engineer, legal scholar, and author. At his memorial, he was described as “one of the most remarkable cases of versatility that our country has ever seen—sailor, soldier, engineer, lawyer, orator, editor, novelist, story-teller, poet, biblical critic, theologian, teacher, chess-player—he was superior in each capacity. What he did, he always did well.”

Well known as he may have been in his lifetime, I only ever came across his name because that inspiring quote is used in a woodcut bookplate by J.J. Lankes (1884–1960) that caught my eye in a quaint bookstore some years ago. Both quote and bookplate remain favorites of mine, serving as reminders that what we can readily see ahead of us falls far short of telling us all there is to be known about the true extent of any particular subject.

So it is with clinical research in these challenging times when so much that we thought we knew about the workings and limitations of the enterprise being fixed has been upended, reconsidered, rearranged, and reconstituted to the betterment of patients and practitioners. Here are some examples of how new perspectives are being put into practice by various players in the field (no endorsements implied) who are helping us see clearly things which were once obscured. Also shared is a cautionary tale about comeuppance for thinking no one in authority will ever see past any deceptions you may be guilty of in the pursuit of knowledge. 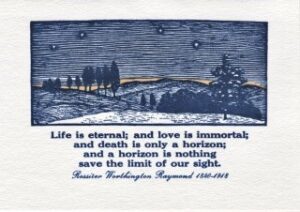 Researchers say they have honed and advanced an alternative statistical method that can make clinical trials more reliable and trustworthy, while also helping to remedy what has been called a “replicability crisis” in the scientific community. In a new paper in the Proceedings of the National Academy of Sciences, the researchers further the “fragility index,” a method gaining traction in the medical community as a supplement to the p-value, an often-misunderstood measure used to determine whether study results have merit or are just a chance occurrence. The paper is written by statisticians from Cornell and doctors from Weill Cornell Medicine and the University of Toronto.

“Clinicians trust that the procedures and protocols they carry out are informed by sound clinical trials. Anything less makes surgeons nervous, and rightly so,” said Martin Wells, a professor of statistical sciences and a paper coauthor. “We’re discovering that many of these consequential trials that showed promising results and that were published in top journals are fragile. That was a disconcerting surprise that came out of this research.”

Skepticism surrounding the p-value’s reliability, when used on its own and without supporting methods, has grown in the last 15 years, particularly as past trial results initially deemed strong couldn’t be replicated in follow-up trials. In a 2014 study using the fragility index, researchers analyzed 400 randomized clinical trials and found that one in four with “statistically significant” p-values in fact had alarmingly low fragility scores, indicating less reliable results. The fragility index investigates what number of patient outcomes could tip a trial in either a successful or unsuccessful direction.

“Adverse events after placebo treatment are common in randomized controlled trials,” said lead author Julia W. Haas, PhD, an investigator in the Program in Placebo Studies at BIDMC. “Collecting systematic evidence regarding these ‘nocebo’ responses in vaccine trials is important for COVID-19 vaccination worldwide, especially because concern about side effects is reported to be a reason for vaccine hesitancy.”

Senior author Ted J. Kaptchuk, professor of medicine at BIDMC, and colleagues are known for a large and growing body of evidence showing that full disclosure of placebo treatment, what he calls “open label placebo,” can actually improve common chronic conditions without any nocebo effects.

Writing for SubjectWell in January, Ivor Clarke describes how, in order to better understand the sentiment of patients with Parkinson’s disease (PD) toward both their specific symptoms and their attitudes about clinical trials, SubjectWell fielded a survey to 217 patients with PD.

According to a report from Mintz, on January 12, 2022, Olga Torres, co-owner of the clinical research site Unlimited Medical Research (UMR) in Miami, Fla. pleaded guilty to one count of obstruction of justice after she knowingly lied to a United States Food and Drug Administration (FDA) investigator. The conduct that led to the charge stemmed from a clinical trial run at UMR to evaluate the safety and efficacy of a pediatric asthma drug. Torres admits having made a number of false statements to FDA investigators to create the appearance that the trial had been conducted legitimately and honestly when she knew that it had not. For example, she told FDA investigators that UMR prepared accurate and complete medical records in conjunction with the trial and that study subjects were seen at UMR and not another location. In fact, the records of the study subjects had been falsified and UMR had fabricated data showing that subjects had attended study visits at UMR. Previously, the principal investigator and others involved in the trial had pleaded guilty to wire fraud in connection with the study.

* It has come to my attention that Raymond was most likely liberally borrowing this phrase from William Penn (1644–1718), but you get the idea.